Skip to Content
Thursday, January 12, 2017 — After all, there’s nothing quite like a blanket of fresh powder to make you feel all warm and fuzzy inside – even if the five games featured below involve head-to-head combat, alien invasions, and the actual apocalypse.

The Climb for Oculus Rift invites you to experience the white-knuckled sensation of scaling sheer cliffs in VR, and with so much to see, looking down (and everywhere else for that matter) is actively encouraged. The new North setting added to the game recently transports players to an environment inspired by the frozen Arctic Circle. There are polar bears, puffins, submarines, oil rigs, and even an active volcano to feast your eyes on. The fact that players can now tackle North – and every other location in the game – with the new Touch motion controllers is the icing on the cake.

Free-to-play shooter Warface has a rich tradition of pitching players into battle amid spectacular snow scenes, with veterans first braving the elements in the Siberia-set Operation Cold Peak. We recently saw the trend continue with the arrival of Icebound – a new PvP map buried under a deep blanket of the white stuff. Expect to see (or not see) tanks peeking out from beneath a snow drift, fir tree forests, and even the twinkling Northern Lights. It’s postcard perfect. Apart from the people shooting at you, obviously.

No other game has embraced CRYENGINE’s power to create winter wonderlands quite as extensively as Poppermost Productions’ open-world sports sim, SNOW. With massive mountains to explore, the option of traversing the landscape on skis, snowboards, or snowmobiles, and the freedom to mould the terrain to your liking, SNOW is an absolute feast for anyone who loves the whiter side of life. And if you want to go a little more competitive, just show off to your friends in the Winter X Games and don’t forget to share your most awesome or funny moments.

Everybody’s Gone to the Rapture (PlayStation 4)

Continuing their reputation for genre-defying, emotionally charged games, The Chinese Room conjured up a truly haunting world in CRYENGINE for their PS4-exclusive, Everybody’s Gone to the Rapture. This tale of strange goings-on in England’s Shropshire countryside placed the beauty of the environment front and center, with some perfectly formed snow scenes thrown in for good measure. Spoiler alert: The missing citizens of Yaughton Valley are not hiding in a giant community igloo.

For an icy blast from the past, the snow scenes in Crysis are hard to top. Just as players are starting to get accustomed to the tropical temperatures of the Lingshan Islands, the naughty Ceph unleash their own brand of weird science to turn the place into a giant deep freeze. Thankfully, the Nanosuit wasn’t just designed for the sunny season, and it’s not long before Nomad has the opportunity to teach the invaders that, on Earth, one does not simply turn off the heating.

If you are still craving snow after these treats, we highly recommend you get your CRYENGINE launcher fired up and work on a nice winter scene yourself. Why not start with these free assets from our marketplace? Oh and make sure to show us the results by sharing on Facebook, Twitter or the official forums. 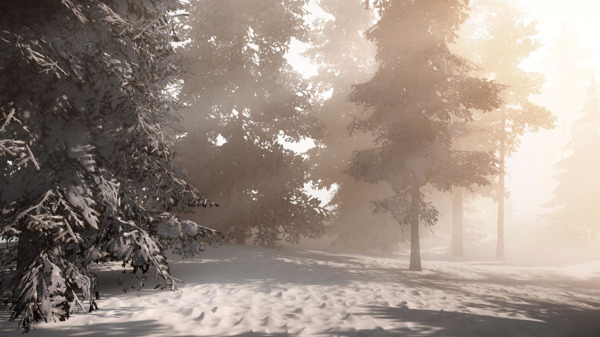